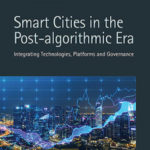 The chapters examine the changing nature of cities in the face of smart technology and key new challenges and capabilities from integrating digital technologies, institutions and governance. It argues that using algorithmic logic alone for automation and optimisation in modern smart cities is not sufficient, and analyses the importance of integrating smart city technology with strong participatory governance and digital platforms for community action.

Separated into three parts, the book moves from looking at the academic establishment of the smart city paradigm as an advanced system of innovation (part 1) to focusing on major digital technologies that allow collaborative initiatives to develop at large-scale, such as the IoT, data science, social media, blockchain and artificial intelligence (part 2), and the governance of smart cities and how technologies and digital platforms allow for citizen engagement and collaboration networks that generate innovations for better cities (part 3).