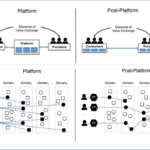 An open access paper just published on the “post-platform economy”, an economy based on decentralized and self-organized interactions between producers and consumers over “Distributed Market Spaces”.

Currently, very successful platform-based ecosystems are verticals markets. They manage to leverage technology and network effects, setup large ecosystems, and gain unprecedented power, putting them in a position of a monopoly. “For each of these domains, several platforms exist. However, they focus only on products and services from the supported domains (e.g., Eventim (http://www.eventim.com) for domain ticketing and MyTable (http://www.mytable.com) for gastronomy), which is why platforms are often called “verticals”. Figure 2 illustrates the vertical orientation of contemporary platforms spanning over domains (Domain1,⋯,Domainn).”

In a post-platform economy, consumers and providers are considered equal in their rights and responsibilities as they can engage in complex product scenarios directly without any intermediaries. The paper proposes a reference model for this type of economy, describing its dimensions, views, phases and stages, and specifying the core elements. Thereafter, it demonstrates the application of the proposed reference model with a case study on smart city services.